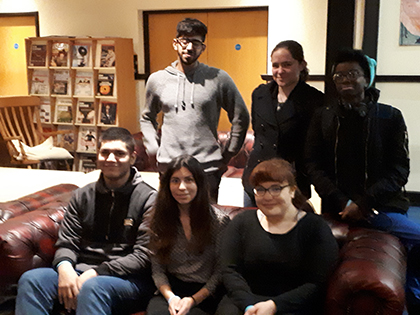 A debating team from The Sixth Form College, Solihull has just secured a victory in the first heat to the English Speaking Union School’s Mace debating competition for 2017-18 held at Warwick School.

This was the first time the College had entered the competition and it was a real boost for the Debating Society, which has started to flourish this year.

The motion was: ‘This House would add e-sports to the Olympic Games’. Rocio Leano and Amelia Lewis were opposing the motion for the College and were able to convince the panel of judges of their side of the debate.

“Through the strength of their arguments and the effective countering of the proposers points, Rocio and Amelia convinced the judges that the Olympics should remain free of e-sports. Watching, I was immensely proud of both the debaters and the small team from the Debating Society that had travelled to support them and help the pair rehearse their arguments.”

The Debating Society were now looking forward to the next heat hoping to build on this term’s success.

Debating Society is one of many student-led societies that run in College. These vary from year to year and depend on the interests of the students each year. This year’s popular societies include the LGBT Society, Anime Manga Society, Gaming Society and the College Health Ambassadors.