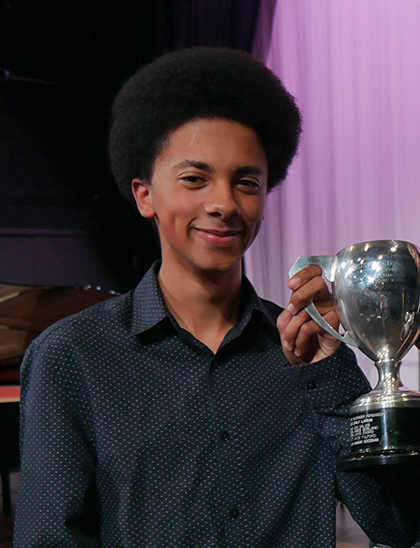 Former Ninestiles Academy student Alex Polack (aged 17, from Moseley) has offers from Guildhall, Trinity and the Royal Birmingham Conservatoire. He has chosen Trinity College of Music as his first choice option and has been offered a £6,000 a year scholarship there, which is the maximum scholarship available.

“I liked the ethos at Trinity and it will help me to progress as a musician in a supportive environment. I’m looking forward to living in London, where there are many opportunities.

“I had to audition, but that process was enjoyable as you play with high level fourth year musicians, so it was a good experience and quite friendly. I played two contrasting pieces with the band and then had an interview, talking about plans for the future and other applications, as well as what I’d been doing for the past few years. Other colleges, such as the Guildhall, were quite different on interview day with aural tests and an arrangement task.”

Alex plays the Jazz Trumpet and performs with the Midlands Youth Jazz Orchestra and the Junior Conservatoire in Birmingham, as well as playing in a jazz fusion band with friends called The Outer Circle. He has also been involved in the College Jazz Band and was joint winner of the Heartfield Wharam Scholarship at a concert in October.

“I’ve had plenty of performance opportunities in the College. I’ve played a solo in most of the concerts and winning the competition was a boost. I’ve had useful feedback from those performances too. My ideal career would be a professional jazz musician,” explained Alex. “That would hopefully include a mix of studio sessions and bands, but teaching is an option, and most professionals combine both.”

Alex is also studying A level Geography and Photography, as well as A level Music, at the College.

Music teacher Chris Phelps added, “It’s an exciting year. Eight of the ten Music students we have in Year 13 are going on to study Music at university and two have places at Conservatoires.”