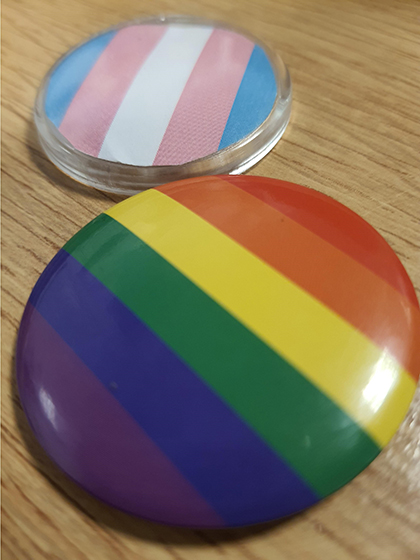 The event shone a light on hate and discrimination suffered by the LGBTQ+ community for many years, as students put up stands and posters and sold badges with the transgender flag (which students had made themselves), as well as various badges with the Pride Flag.

Transgender Awareness Week also raised the visibility of transgender people and addressed some of the issues members of this community face. The students researched this and found that this key awareness event began in 1999 by transgender advocate Gwendolyn Ann Smith as a vigil to honour the memory of Rita Hester, a transgender woman who was murdered in her flat in Boston in 1998. It serves to remember all those persecuted for being transgender.

Students also learned how the movement for LGBTQ rights in the USA dates as far back as the 1920s. Since then, various groups have advocated for LGBTQ rights and the movement accelerated in the wake of the Stonewall Riots of 1969. Homosexuality was illegal at this time in all but one state in the USA and bars and restaurants like The Stonewall Inn, could be shut down for having gay employees or serving gay patrons. Police raids on gay bars were common, but on that particular night (28 June 1969), members of the city’s LGBT community decided to fight back. Despite having been taken apart by police, Stonewall Inn opened the next night and supporters flooded along chanting slogans like “gay power” and “we shall overcome”.

“Celebrating our rich and diverse community is fundamental to the college. Sharing, listening to and respecting each other’s views and beliefs helps create a safe and equal environment for all. We are proud of how the students have taken the initiative to find out more about trans rights as part of our anti-discrimination culture.”