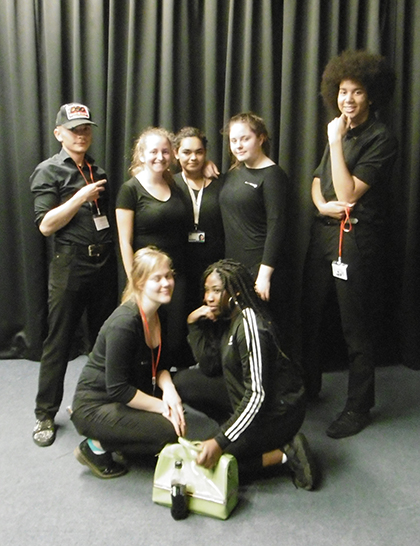 Budding actors at The Sixth Form College, Solihull have been tackling the important issue of bullying through the medium of acting this week.

Students who are part of the Solihull Theatre in Education enrichment visited Lode Heath School to perform “Blackout” by Davey Anderson and conduct a workshop with their Year 9 pupils.

“Blackout” tells the story of 15 year old Jay, who wakes up in a prison cell and can’t remember how he got there. It’s a hard-hitting play based on a true story about getting bullied, fighting back, doing something stupid, losing everything and then finding your way again.

A group of seven students have been working hard on this production. However, their focus was not just on their own performance. They froze the action in places to talk to the Year 9 pupils, challenging them to consider what was happening and to give advice to the characters. It forced them to tackle some weighty issues and Head of Year 9 at the school, Jeremy Hatton, commented:

“I was really impressed with the way the students commanded the stage and their professionalism, ease and confidence whilst performing. All of our pupils agreed that this type of performance and the messages covered in the play were incredibly useful for them.”

Solihull Theatre in Education Coordinator Sarah Law, who is also an Academic coach at the College, commented:

“I’m so proud of the students for the work they have done. This project has enabled them to develop their acting skills, but also to grow team-working and leadership skills too. The pupils at Lode Heath School clearly got a lot out of the experience and we look forward to working with them and other schools in the future.”