Intrepid explorers from The Sixth Form College, Solihull have just returned from a life-enhancing trip to The Gambia, where they volunteered at a nursery school for which they have raised almost £10,000 this year. 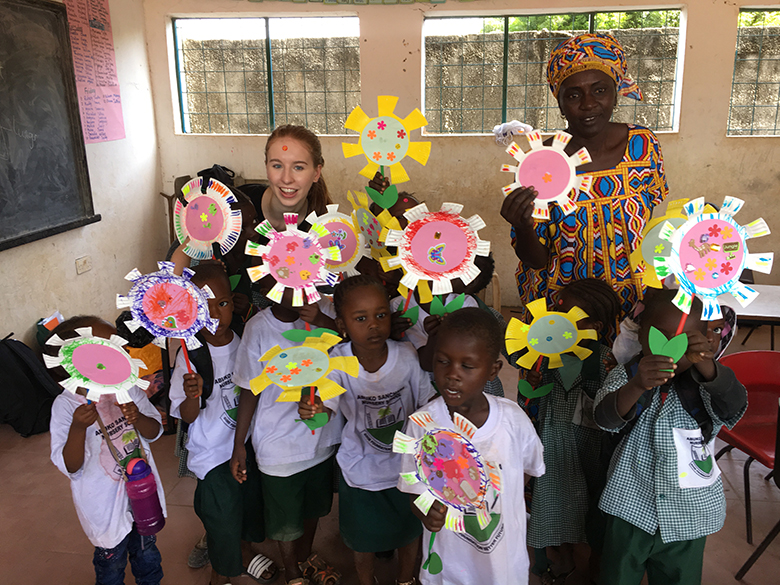 A group of 22 students joined the College’s Team Gambia project back in February and since then have been fundraising for the Abuko Nursery and Lower Basic School, near Banjul. They had a target to raise £400 each and through cake sales, car boot sales, charity quizzes, sky dives and sponsored climbs, all exceeded that goal. Their efforts culminated in a week-long trip to The Gambia in late November, where they got to see how the money they have been raising is being put to use.

While in The Gambia, the students spent every morning at the school and taught the children (aged 4 to 6) in small groups. Many of the activities that the students undertook with the children were active and visual, such as singing, colouring, word and picture matching and there were lots of outdoor fun and games too. The Gambian children are used to rote learning in large classes, so this more personalised attention was very welcome.

Hannah Sharp (aged 17, from Solihull) went on the trip and commented:

“It really was a once in a lifetime opportunity – completely indescribable. To be able to see where you hard work and fundraising is going first hand and to see that it’s making such a huge difference to hundreds of people’s lives is amazing. The days out were an additional bonus – especially the monkey reserve and craft market. I was particularly struck by the realisation that things we take so easily for granted back at College such as tiled floors and chairs can make such a significant and pivotal improvement in regards to the life and education of the children.”

“Seeing how happy the kids were to see us and spend time with us was amazing; I was surprised by how many children there were in each classroom and the school as a whole.”

The Sixth Form College, Solihull and Hamstead Hall School in Handsworth Wood have worked together for many years to fundraise and build the nursery school in The Gambia from the ground up, so that children in this very deprived region can get an education.

“This was the College’s sixth trip to The Gambia and every time is as rewarding as the last. It’s a fantastic opportunity for our students to experience another culture and help children who have not had the same life chances they have been fortunate to have. They have grown in confidence and learned valuable skills that will help them with whatever they go on to do after College, while really helping the Gambian children in the process.

“The students also worked really hard in the build-up to the trip, raising money for the nursery and I’m really proud of their efforts. All the money we have raised in the last six years, more than £50,000 in total, benefits the Abuko Nursery School and community. Since we joined the project we have completed three classrooms and on this trip we were putting the finishing touches to a further three. While we were visiting, the floors were being laid, the walls painted and blackboards installed. We visited a factory and chose chairs for the new classrooms and it was awesome to see them being delivered to the school and our students taking them off the lorry and actually putting them in the classrooms themselves. It is humbling to think that we have played a small part in helping children at this school to get an education.”

As well as working at the school, there was time for the students to experience more of the local environment and culture. They visited the mangrove swamps, a monkey sanctuary, bartered at Serrakunda fish and textiles market and visited the National Assembly building in Banjul. They also took a trip to nearby Senegal to go on a safari and saw Zebra and Rhino.

See more photos from this trip in our Facebook Album.