Adventurous students from The Sixth Form College, Solihull have just returned from a life-enhancing volunteer trip to an impoverished school in The Gambia, for which they have raised over £6,000 this year. 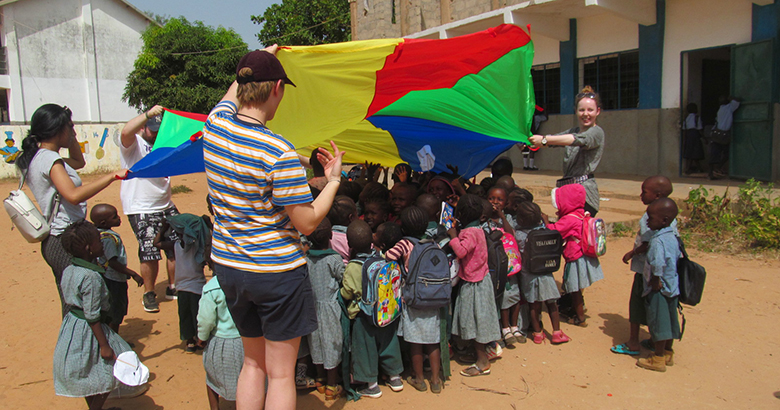 A group of 19 students joined the College’s Team Gambia project back in February and since then have been fundraising for the Jemus Jungkung Jammeh Memorial Nursery and Lower Basic School in Abuko, near Banjul. They each had a target to raise £400 each with their efforts culminating in a week-long trip to The Gambia in late November

The students spent every morning at the school during their visit and taught the children, aged 4 to 6, in small groups. Many of the activities that the students undertook with the children were active and visual, such as singing, colouring, word and picture matching and there were lots of outdoor fun and games too. The Gambian children are used to rote learning in classes of 50 – 60 kids to one teacher, so this more personalised attention was very welcome.

Student Alima Arif (aged 17, from Birmingham) went on the trip and commented:

“I did not expect the teaching at the school to be such an overwhelming experience. As a result I have gained so much in confidence.”

“I have gained the ability to connect more effectively with young children, helping to develop their learning and also how to work as part of a team in a challenging situation.”

This project was set up by Peter Evans from Hamstead Hall School in Handsworth Wood. He has worked for many years to fundraise and build the nursery school in The Gambia from the ground up, so that children in this very deprived region can get an education. This is the fifth year that the College has participated in the project, bringing the total amount raised to more than £41,000.

“The students in Team Gambia this year have been so committed to this project. They have raised money in lots of ingenious ways and this trip enabled them to see what all that hard work was for. They have grown in confidence and learned valuable skills that will help them with whatever they go on to do after College.

“I’m proud of all the money we have raised this year and in previous years. All the funds benefit the Jemus Jungkung Jammeh Memorial Nursery and Lower Basic School. Since we joined the project we have already built three classrooms with a further three under construction. We have also provided lots of resources for teaching and paid the teachers annual salaries. They each earn around £400 per year! The money we have raised will be used to complete the three classrooms. It is humbling to think that we have played a small part in helping children at this school to get an education.”

As well as working at the school, there was time for the students to experience more of the local environment and culture. They visited the mangrove swamps, tried kayaking, visited a monkey sanctuary, bartered at Serrakunda fish and textiles market and visited the National Assembly building in Banjul.

See more photos from the 2017 Gambia trip on our Facebook page.