The Student Council at Solihull Sixth Form College has handed out a series of awards to staff and students as we approach the end of a hectic academic year. 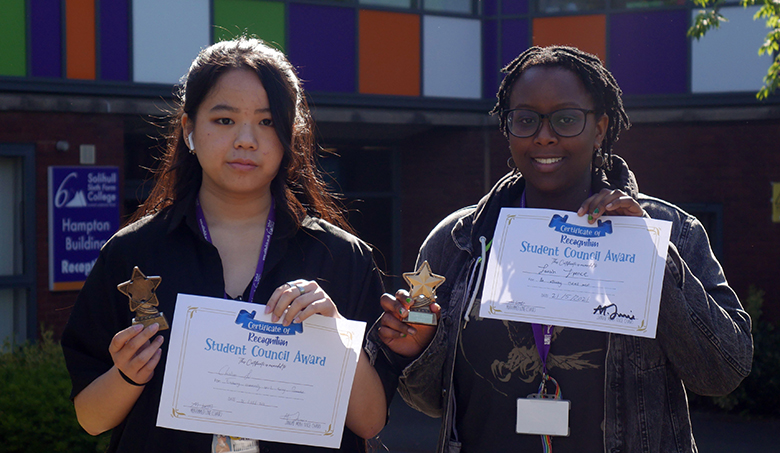 Staff had the opportunity to vote for which students they thought were most deserving of recognition, while students alone decided which staff should win awards. The aim was to enable both staff and students to show their appreciation for the other for all the hard work and effort gone into learning and teaching this past year. The Student Council chose the final five successful individuals, based on the number of nominations for each person and the reason for their nomination.

The students selected for prizes were Sarah Spence and Christina Li. Sarah was recognised for her online BAME speaking event, for which she organised a host of outside speakers to join a Teams Live event to discuss race. She was also praised for her excellent leadership and organisational skills. Meanwhile, Christina was chosen for her work with student societies, which included supporting the BAME speakers event and creating BAME Society logos, as well as her dedication during lockdown, when she came into College to use the Learning Resource Centre each day.

Three awards also went to staff, with Principal Martin Sullivan, History teacher and Assistant Curriculum Leader Allison Sayer and Physics teacher Rick Homer selected by students. Principal Martin Sullivan was chosen for his consistent support of Student Council events, such as the recent Fun Day, and recognition of the extra hard work that went into organising a fair results-forming process for the Year 13 students during the pandemic.

Meanwhile, Allison Sayer was selected thanks to her teaching and perseverance; her nomination included a line about how her whole class was grateful for her and it seemed she had been very impactful on them. Rick Homer is held in similarly high regard by his students, as those who voted for him cited his commitment across all different types of teaching – remote and in-person – and his readiness to be available to his students when they needed it.

“The purpose of these awards was to create grassroots awards, nominated by staff and students’ peers, to show real appreciation and recognition, rather than accolades from a faceless committee. The Student Council is also hopeful we can run this award in future.”

“I think these awards are a wonderful idea that Student Council have come up with. After an incredibly challenging last year, showing mutual appreciation for both staff and students is a heart-warming thing to do. I hope they will continue this in future years too.”