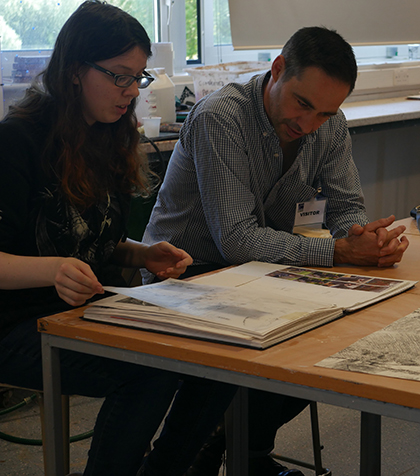 A respected painter, nominated for the PB Portrait Awards on eight occasions, visited Art students at The Sixth Form College, Solihull recently to deliver tutorials and award a prize for the stand-out artwork this year.

The Stephen Earl-Rogers Award was given to Year 12 Fine Art student Jessica Skidmore (aged 17, from Birmingham). She beat off competition from many other gifted students with her mono print. Stephen Earl-Rogers said choosing a winner to be incredibly difficult and he was impressed with the standard of work produced this year.

Stephen spent time talking to many of the Fine Art students about their work to discover their motivation, what they were trying to say with their artwork and how they would develop their work further. He was able to offer constructive advice about the individual works of art and what students could do to develop their talent in the future.

“This is the second time Stephen has visited the College and we are grateful to him for giving up his time. He has such passion for art and that came across in his interactions with students. The students really enjoyed the one-to-one advice they were able to get and he offered very useful advice to them.”

Stephen Earl-Rogers has exhibited at the BP Portrait Awards on eight occasions. His work has been shown in most major cities throughout the UK and has been sold through Sotheby’s and exhibited at Christie’s and London’s Mall Galleries. He has also exhibited at Art London in Chelsea, the Ikon Gallery in Birmingham in 2011 and Art 2005 at the Islington Design Centre. He was selected for the prestigious Garrick Milne prize exhibition and invited by the National Portrait Gallery to contribute work to an exhibition celebrating its 150th anniversary.