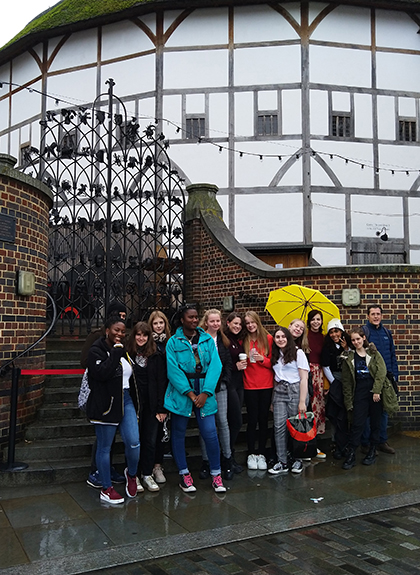 English students from Solihull Sixth Form College’s Shakespeare Academy enjoyed a trip to London this week for a guided tour of the Globe Theatre and a performance of ‘Henry V’.

Shakespeare’s Globe, founded by the actor and director Sam Wanamaker, is a reconstruction of the original Elizabethan Globe playhouse. ‘Henry V’ was the first play performed at the theatre when it opened in 1997. The trip gave students an opportunity to find out about the theatre itself and the plays that Shakespeare wrote, before watching the critically acclaimed production of ‘Henry V’, starring Sarah Amankwah in the title role.

“This was a fantastic opportunity for the student to get an insight into Elizabethan theatre and to see a really interesting production of Henry V.”

“Visiting the Globe in London was a really valuable experience that I wouldn’t have been able to attend without the Shakespeare Academy. It was refreshing to see a variety of actors interpreting ‘Henry V’ in an alternative fashion. The tour was enlightening for both the performance of ‘Henry V’ and my A Level English studies.”

The Shakespeare Academy is one of the College’s enrichment courses, known as a Specialist Academy. It offers its members the chance to gain an insight into three Shakespeare plays not covered on their A level English courses through a programme of seminars and theatre visits and to study for an Extended Project Qualification inspired by their study of one or all of these plays.