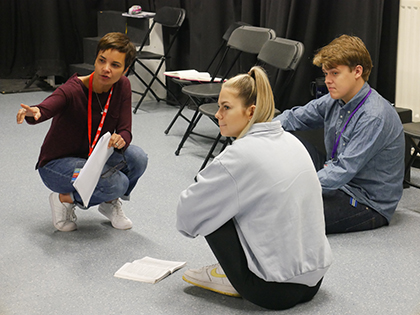 English Literature and Drama students at Solihull Sixth Form College took part in a Shakespeare workshop with a professional actor in College this week.

RSC and television actress Rina Mahoney came into College to work with our first year A level English Literature and Drama students and helped them with their understanding of William Shakespeare’s ‘Othello’. Having played understudy for the role of Emilia in ‘Othello’ for the Royal Shakespeare Company, Rina was perfectly placed to get the students thinking about the play differently than they had previously done.

The workshop explored the rhythms of blank verse, as opposed to prose, and students were encouraged to read aloud and attempt to act out a passage from the play. The session encouraged students to delve deeper into the meaning of the text and how it might be portrayed on stage. They were also given advice on how to memorise sections of their texts, which they will need to do for their examinations.

Rina Mahoney is a successful actor, having recently played the role of Gertrude in ‘Hamlet’ at The Shakespeare Rose Theatre, York. Other recent roles include The Woman in ‘Death of a Salesman’ at The Royal Exchange Theatre, as well as Lady Macduff in ‘Macbeth’ and Quince in ‘A Midsummer Night’s Dream’ at Shakespeare’s Rose Theatre in York. Rina also stars in ‘The Archers’ on the radio and performed in ‘Romeo and Juliet’ and ‘Macbeth’ for the RSC in their BBC Live Lessons. On TV, she appeared in Series 5 of ‘Scott and Bailey’ for ITV and her other credits include ‘Emmerdale’, ‘Coronation Street’, ‘Doctors’ and ‘Casualty’.

“We are so grateful to Rina for giving up her time to visit us. The workshop brought Shakespeare to life for the students and encouraged them to think creatively. It has inspired me to encourage my students to read Shakespeare out loud more in the future, because it brings a different dimension to Shakespeare.”

One of the students who participated in the workshop spoke to Rina about her plans for her Extended Project Qualification (EPQ). She plans to write the end of Shakespeare’s ‘Measure for Measure’ for her EPQ and having performed in this play herself, Rina has agreed to help by answering some questions to aid this research project.