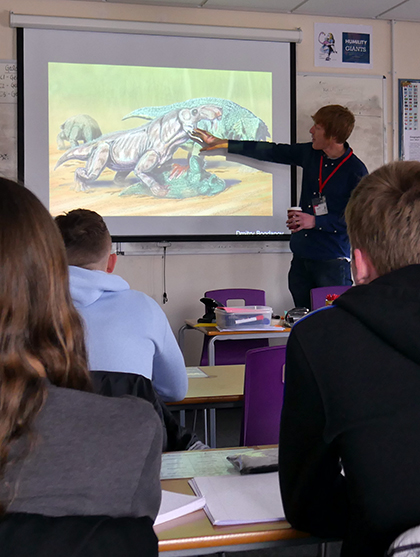 Geology students at Solihull Sixth Form College travelled back in time 250 million years this week, thanks to a lecture on dinosaurs from a visiting speaker

Professor Richard Butler from the University of Birmingham came into College to talk to A level Geology students about the origin and rise of dinosaurs. He explored their rise in the late Triassic period and showed students research done into linking species such as the Teleocrater rhadinus, a reptile that possessed many of skeletal similarities to dinosaurs that followed it.

He explained how dinosaurs evolved on the same line that has created modern-day birds and introduced students to what scientistis might be the oldest true dinosaur: a Nyasasaurus. The professor also talked to students about some of the exciting areas of research that are currently being undertaken, including predicting weather patterns from the era of the dinosaurs.

“Dinosaurs are a fascinating area of Geology and one that never fails to generate interest in our students. Palaeontology is an important part of the A level Geology course, so we are grateful that Professor Butler gave up his time to come in and talk to the students.”