New Leadership at the College

The Sixth Form College, Solihull is announcing a change of leadership with current Principal Paul Ashdown retiring at the end of March and Dr Martin Sullivan taking over as Interim Principal. 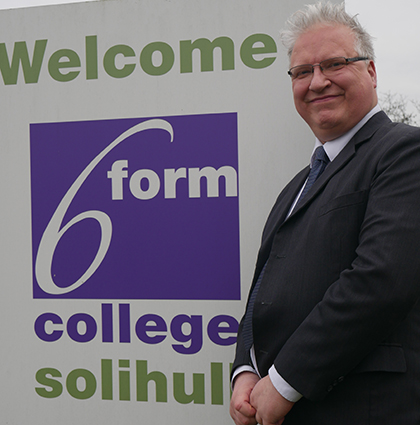 Paul Ashdown announced his decision in a letter to students and parents this week, in which he said:

“I have had a truly wonderful time leading The Sixth Form College, Solihull and have enjoyed working with both staff and students to create a college we can all feel very proud of.”

Dr Martin Sullivan, currently Vice Principal at the College, will take over on 1 April 2017 and guide the College through the months ahead. This will include the application for conversion into an academy and merger with The Ninestiles Academy Trust, which was announced recently. Martin has over six years experience as a Vice Principal, having joined the College from Gloucestershire College in 2010. He started his career as a teacher of Chemistry and Computing.

“It is a privilege to be chosen to lead this great College, with its excellent staff and students, during this exciting time of merger.”

“I fully and whole heartedly support the move to academise and merge with the Ninestiles Academy Trust. It will create a more financially sustainable and robust organisation, which will be able to offer both staff and students more security and improved quality. With such an exciting move on the horizon, choosing to retire has not been easy. However, the leadership of the College now needs to be in the hands of someone who will inspire the next series of advances and build for the future, rather than someone in the final stage of their career. This really feels like the right time for me to hand over to someone new.”

The appointment of a permanent Principal will follow the conclusion of the application to academise and merge with the Ninestiles Academy Trust, which is planned to be in August 2017.