Two Music Technology students at The Sixth Form College, Solihull have started their second year of study in the best possible way, by winning the annual Music Technology Remix Competition. 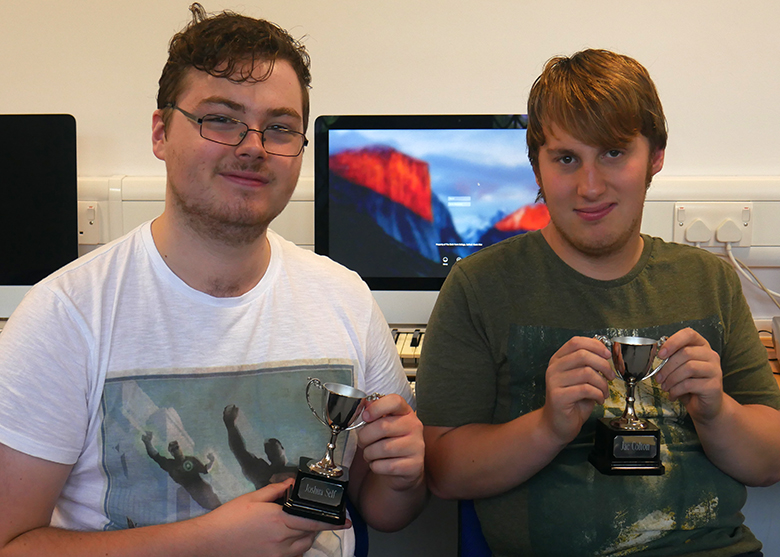 Joshua Self (aged 17, from Shirley) and Jac Colton (aged 17, from Solihull) were judged to have come up with the best remixes of the ‘Imperial March’ from ‘Star Wars’ by John Williams. The remixes had to be 2 minutes in duration and made use of the industry standard software that Music Technology students have at their disposal.

Dr Simon Hall, Head of Music Technology at the Birmingham Conservatoire, judged the entries and enthused about the overall standard of the remixes.

“There was an excellent crop of remixes, as I have come to expect. I had to go for a tie between Jac and Josh. Although they had very different interpretations, both were creatively conceived, well-realised and idiomatic in production.”

He went on to praise their individual pieces: “Jac’s use of instruments was creative, and he made subtle allusion to the original without overstating too quickly or obviously. There was also good use of delays. Meanwhile, Josh’s piece had a nice opening and alluded to the original well without overstating it. There was a bit of a Tipper vibe to it in terms of soundworld and a very good energy. I liked some of the movement in terms of the left to right motion and I thought the whole piece was well handled.”

“Many thanks to Dr Simon Hall for taking time to listen to the students’ work. We are delighted to be working with the Birmingham Conservatoire and it’s really beneficial to the students to get feedback on their work from a Higher Education institution.”