Music Scholarship To Be Decided

Gifted musicians will do battle for a scholarship fund at the first music concert of the year at The Sixth Form College, Solihull this month. 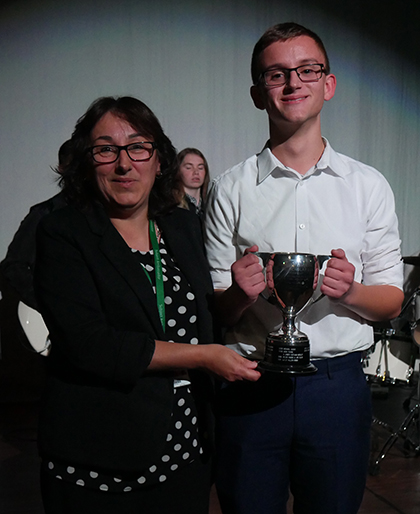 The Heartfield-Wharam Scholarship Concert takes place on Wednesday 18 October at 7.00pm in the College Theatre and students will be auditioning to win a bursary prize. The £150 fund is to spend on music tuition from an eminent performer of the winner’s choice.

This bursary was set up in memory of two great musicians who strongly supported music in Solihull and at the College. Roy Heartfield was the original Head of Music at the College, who died in post in 1992, while Margaret Wharam was the former Head of Music at Malvern Hall and Head Organist at Solihull Methodist Church. The first winner of this prize was in 1994 and for the last 23 years the scholarship fund has continued.

Last year, Lukas Evans (pictured right) was judged to be the winner, thanks to his performance of the 1st Movement of the Violin Concerto in G Major by Haydn.

“Performing in front of an audience is a daunting prospect, but our students have picked particularly challenging pieces to perform in the hope of winning the prize. I commend all the students who are putting themselves forward for this challenge and wish them the very best of luck. I would also urge parents, friends and staff to come along and give their support; it will be a very entertaining evening.”

Admission is free and there is no need to book tickets in advance for this concert.