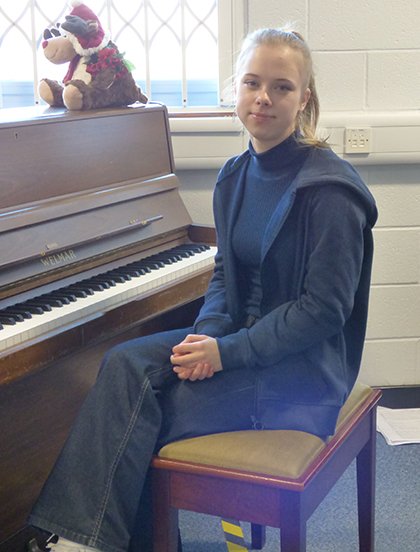 A talented former Music student at Solihull Sixth Form College has been honoured by the judges in the BBC Young Composer of the Year competition.

Polina Savicka (aged 19, from Birmingham) was one of five young musicians named by the judges in the A level age category – two were picked as winners, while three (including Polina) were highly commended. Polina entered her A level final submission for the competition last May. Entitled ‘Feel Study’, the composition may now be picked up by concert pianists wanting to perform it.

“I’m so thankful for the opportunity to express myself creatively and freely in the BBC Young Composer competition. My composition was the culmination of my style so far, bringing together many musical influences from over the years such as classical, jazz and minimalism. Receiving a commendation for this work gives me confidence as an aspiring composer.”

“This is wonderful news and I’m so pleased for Polina. The BBC Young Composer of the Year competition is seen as the major composing competition for students and is judged by members of the BBC Proms team and many significant musicians. Perhaps one day, we shall see this work listed on a recital programme by other pianists. Polina will be performing it at our Christmas Concert on 14 December.”

Polina came to the college from Woodrush High School and achieved A* grades in A level Music and English Language, as well as an A grade in French. She left the College this summer and has progressed to Trinity Laban Conservatoire of Music and Dance to do a Composition degree.