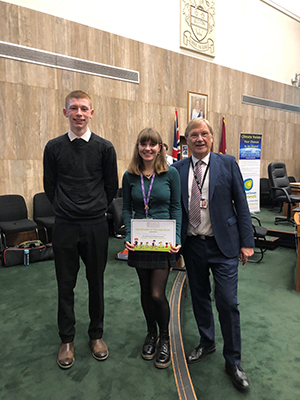 Representing Indonesia, Hana Mian, Inayah Khan, Martha Tole and Joe Burgess outlined the serious challenges that Indonesia faces as a result of global sea level rises, especially the submergence of their capital city Jakarta. They put forward proposals for financial aid from the biggest polluting nations including China, India and the United States.

The learners also accepted an award on behalf of the College from Solihull Council’s Your Future Lead Councillor Ian Courts and Sustainability Development Officer Sarah Lardner for the College’s green transport credentials.

Geography teacher Helen Evans, who is also working with the Environmental Society at the College, commented:

“Huge congratulations to Hana, Inayah, Martha and Joe for their fantastic team-work and public speaking. All four learners were enlivened by the event and recognised the valuable skills it developed in them. They were a credit to the College.”

This event is just one of the ways learners at the College are getting involved in environmental issues. The Environmental Society is an enrichment that sees learners with an interest in protecting the planet working together towards a common aim. The learners meet every Wednesday and have placed a particular emphasis on their desire to reduce plastic waste at the College.