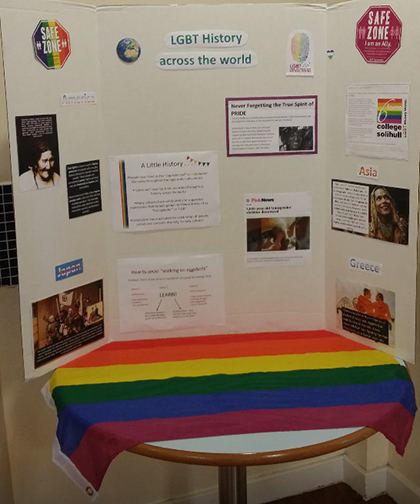 It is LGBT+ History Month in February and The Sixth Form College, Solihull is marking this with a series of activities in College.

The Sixth Form College, Solihull is committed to ensuring Equality and Diversity at the College is celebrated and this includes an active LGBT+ Society that meets regularly. This group of students, supported by the Student Development Officers, are heavily involved in activities for marking LGBT+ History Month this February, including making and distributed badges to staff and students alike and making displays to be put up around College to raise awareness. A bake sale and a Film Festival is planned during the month to raise money and awareness as well.

Posters have gone up around College this month highlighting well known LGBT+ icons from the worlds of Academia, Literature, Music, Film and Television from both past and present.

A Rainbow flag has also gone up at the College and students have been encouraged to take selfies in front of this flag to show their support for LGBT+ History Month. A special hashtag – #SFCSsupportsLGBT – is also being used for this campaign.

“The LGBT+ Society is one of the most active societies we have in College. With the support of a team of staff, the students have been instrumental in making LGBT+ History Month a great success, by raising awareness of LGBT+ issues.”