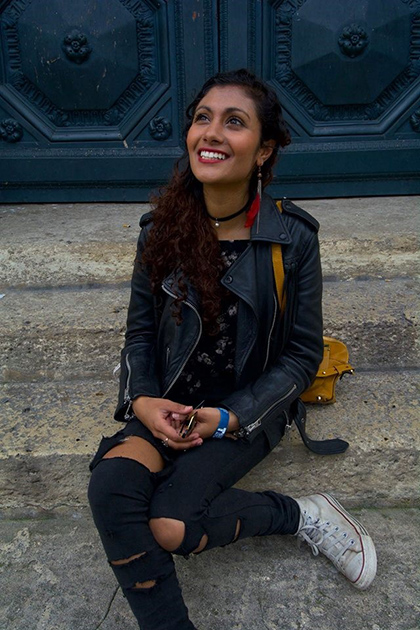 Modern Language students at The Sixth Form College, Solihull have been sharing their journeys since leaving the College, including exciting travels around the world, including Russia, Poland, Czech Republic, Austria, Hungary, France, Spain, Italy and even Jordan.

The College offers A levels in French, German, Russian and Spanish and has a great track record for helping students progress to prestigious universities, including Oxbridge. The department stays in close contact with many of its former students and some have been sharing their stories since completing their A levels.

One such student is Sarah Lloyd, formerly of Woodrush Community High School, who studied Russian as part of her A level programme, before progressing to the University of Sheffield to study Russian, Polish and Czech. She is now employed at the International School of Moscow.

“At university, I had a particular fondness for translation and linguistics and these skills proved to be invaluable to me. Before going to university I was incredibly shy, but since then my confidence has grown and my communication skills have improved in leaps and bounds. I travelled to St. Petersburg in Russia and Cieszyn on the Polish-Czech border and learnt Polish at The University of Silesia. I spent a year abroad and visited cities like Vienna, Budapest and Prague and made friends with people from all over the world. I cannot imagine what my life would be like without having studied languages. My advice would be to seize every opportunity and never give up!”

Another former student is John Goodliff, who came to the College from Queensbridge School and studied A level French and GCSE Russian, before moving onto the University of Manchester to study French and Arabic. This course has seen him spend nine months in Amman in Jordan.

“Taking GCSE Russian at College inspired me to challenge myself with Arabic, a completely new language to me. Whilst the course is language-centred, I love focusing on the more cultural and relational elements, such as history, literature, art, religion, and current events. Going to Jordan was a great opportunity to refine my language skills, but more significant was the chance to absorb culture and immerse myself in a new way of life. Living with a host family let me experience real, everyday Jordanian life, with all its mundanity, quirks, viewpoints, celebrations, and of course, food!”

John has also been in France and undertook a two-month placement working for a newspaper in Normandy. Despite no previous experience of journalism, he has succeeded in getting his work published each week and has improved his French fluency as a result.

For former Alderbrook School student Harriet Jackson, her travels have taken her to Spain and Italy. She was a language specialist during her time at the College and studied Spanish, German and Italian at A level. She moved onto the University of Leeds to continue her Italian and Spanish studies and spent a year abroad in Granada in Spain and then in Fermo in Italy.

“My university experience has been an absolute rollercoaster ride and one that I’m extremely proud of myself for completing! I’m very glad I searched for my own placement as I have now realised I don’t want a career in translation as I had previously thought. I am applying for a range of postgraduate jobs and internships; from a Buying and Merchandising Programme that requires Italian at TJX Europe, to a Civil Service Graduate Talent Pool at the Cabinet Office.”

Lucy Hopkins came to the College from Langley School and studied French and German at A level. She progressed to the University of Birmingham to complete a degree in French Studies. She is currently refreshing her German studies before she starts her teacher training course, with an ambition to become a secondary school teacher.

“Studying a language is very rewarding, albeit challenging. During my year abroad, I worked for seven months as a teaching assistant at a sixth form college in the suburbs of Paris. I learnt a lot about French culture and improved my French a lot living with a French family. It was also nice to have a break from studying before my final year and to focus on improving my French language skills in an authentic environment. I thoroughly enjoyed this experience and it has set me up well for my next step. I am training in French but hope to also teach German in the future. Learning languages has opened up so many doors for me, I hope that by teaching I can encourage and inspire students to learn languages.”

Lastly, Anie Hussain (pictured above), formerly of Hall Green School, focussed on French as part of her A levels. She progressed to the University of York to study History and French and was able to combine those two passions by studying in Paris.

“I decided to enrol on French additional language courses and was able to take them for credit to replace a few History modules – this enabled me to continue speaking French without taking on any extra work and also break up the constant History! As a result of taking French classes in my first and second year, the university allowed me to study abroad in a French-speaking country. I had applied to only French universities and luckily was granted my first choice – studying in Paris at Université Panthéon Sorbonne (Paris I). The Sorbonne is a beautiful and prestigious university, located in the heart of Paris, and I was taught History lessons there in French with French students in their third year. It was definitely a challenge, but super interesting to see the change in teaching and their approach, as a lot of students still wrote all their notes by hand, which is different to lectures in the UK.”

“It is always so rewarding to hear what our former students have achieved after completing their studies with us. We hold reunions ever year and it’s a great opportunity to catch up with their news. They have such enthusiasm for languages and use it to do such exciting things. That is what current and future students can look forward to by choosing languages at A level.”