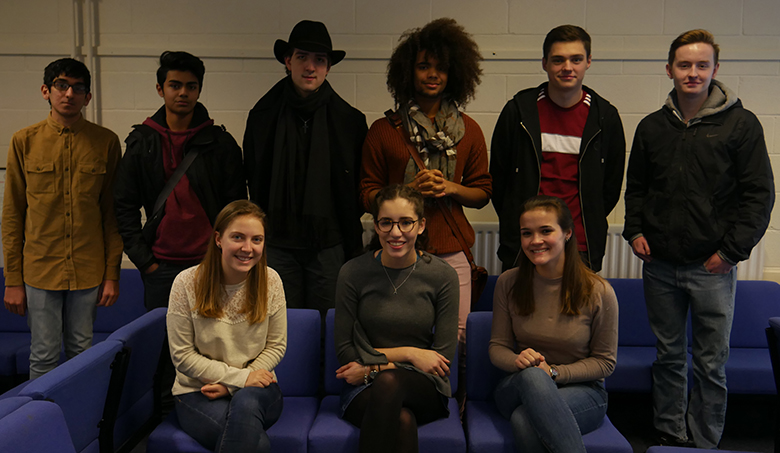 A total of 941 applications to university were made this year – the most we have had since 2011. While most students are still waiting to hear if they have offers, those that applied to the Universities of Oxford and Cambridge had to get their applications in much earlier and nine of them were successful, with three of them getting offers from Cambridge and six hoping to take up places at Oxford.

Two of the Cambridge applicants have received offers from the same college for foreign language courses. Megan Bache and Esther Hurst (both aged 17, from Solihull) have each got offers from Churchill College, Cambridge; Megan’s offer is to study French & German, while Esther has been offered a place to study French & Spanish. Megan explained:

“I went to Cambridge on the languages open day on a trip with College. I really liked the university and decided there was no harm in applying. I love learning languages. Support from the College was amazing, especially the Languages department. I had one-to-one sessions with my teachers about every two weeks for several months before my interview to discuss my extra work. The College also arranged a mock interview for me which was really useful.”

“Through applying, I was able to explore my subject in greater depth, as I read a wide variety of novels and improved my knowledge of culture. Therefore, this part of the process was brilliant and really interesting!  Although the application process, specifically the interview, was challenging, I received a great deal of support from the College throughout the process. The language department at College was incredibly helpful, and I received so much support with my application from them, which helped to prepare me for the interview.  Additionally, the College organised mock interviews which were very realistic and great preparation.”

Also hoping to take up a place at Cambridge is Sam Sayer (aged 18, from Shirley). The former Tudor Grange Academy student has an offer to study Theology at Homerton College, Cambridge. Sam commented:

“I attended an Oxbridge open day event at Edgbaston cricket ground. The talks there were informative and very useful for my application. The College-organised open days to the universities showed me that I would feel comfortable studying at Oxford or Cambridge. The applications process is extremely difficult. All the different stages in the application process can put people off from applying. Luckily for me, the College offered great support throughout the process!”

Fellow student Adam Taqi (aged 18, from Birmingham) is also hoping to study Theology. A former Hall Green School student, Adam has received an offer from Pembroke College, Oxford to pursue this course at degree level. Adam explained why he chose to apply to Oxford.

“After getting my grades from my first year at Sixth Form, I decided that there was no harm in applying to Oxford,” he said. “I thought that even with a rejection I would have gained some invaluable experience by applying. The support from the Principal, my academic coach and subject teachers was excellent and it was easy to arrange a meeting on any issues which I had, which helped a lot.”

Like Adam, Joseph Peace (aged 17, from Solihull) was not sure he would be able to get a place at Oxbridge. However, he applied and has received an offer from Magdalen College, Oxford to study Biology. Joseph commented:

“I was really in two minds about applying. On one hand, I was almost positive I would not get a place, but after attending the open day and receiving support from my academic coach and teacher I felt that it was certainly worth ‘having a go’. If I was giving advice to anyone else wondering whether to apply I would say, don’t be put off by the competition or anything else! There were areas of my application I was sure would prevent me from getting an offer, and meeting some of the people at the interview made me think I had no chance. If you are in two minds about making an application, do it. It’s something I would have hugely regretted not doing.”

Another student with an offer to study a Science subject is Rayhan Mahmud (aged 17, from Small Heath). He has been offered a place on the Physics course at Merton College, Oxford. Rayhan said:

“The most difficult part of the application was the Physics aptitude test; it had required content beyond the College specification. However I had received additional support from the college which had made the process a lot easier.”

“After attending open days I really liked the atmosphere and ethos of Oxford, so I decided to apply on the basis that I could imagine myself there, and despite knowing the work wouldn’t be easy, it would be worth it if I ever managed to get a place. The worst thing about it was the months of waiting in between. However once I was offered an interview, I got lots of support from both family members and the College, particularly since several of the teachers including the Principal were Oxbridge applicants themselves.”

“What really caught my attention was my time at the UNIQ Summer School at Oxford. Getting the chance to experience first-hand the tutorial system and the intellectual vibe of the university persuaded me that it was the right choice for me. My advice to future hopeful applicants would be this: Firstly, apply for a subject you adore. They want nerds who are obsessed, not half-hearted applicants. Secondly, read – a lot. The more you read about the subject and think like the subject thinks, the better suited you’ll be to Oxbridge and their application process. Don’t just read a book: think about it, question it, compare it to others you have read, follow up on the bibliography, et cetera. Lastly, be yourself. They’ve seen a whole tonne of people (especially from private schools) who have been taught how to be “the Oxbridge type”: you’ll stand out better if you’re true to yourself.”

The ninth student with an Oxbridge offer this year is Erin Minogue (aged 18, from Marston Green). She hopes to take up a place at Mansfield College, Oxford to read English Literature at degree level. Erin commented:

“I’m extremely grateful for all the help I received from College at every stage in my application, from the personal statement to the English Literature Admissions Test to the interview stage. Without the help and encouragement I received, the application process would have been much more daunting. Ultimately, I found that the interview stage, which I had been dreading most, was actually enjoyable as it was solely a discussion about a subject I love.”

“Nine successful applicants is brilliant! The challenge that all our Oxbridge applicants undertook in making an application cannot be overstated. They were going up against the very best students from the UK and overseas. It’s a daunting challenge, but they worked hard and staff at the College did their best to support them and it’s wonderful to see that determination rewarded. We will do all we can to continue to support them to get the grades they need to take up these places, as we do for all our students. The rise in applications this year demonstrates that our students see university as an investment into their futures.”