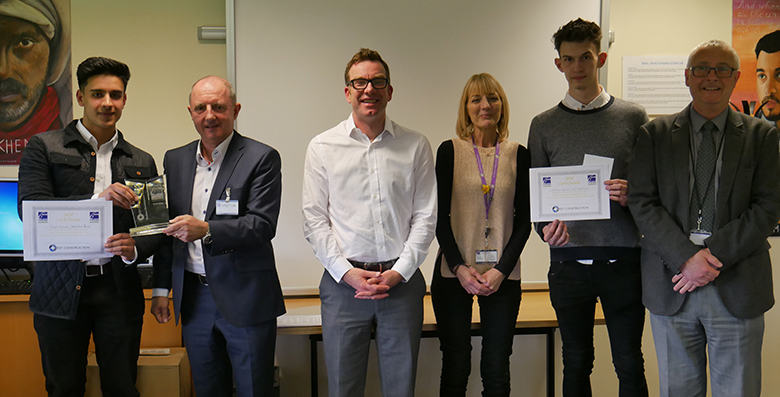 Four groups of students presented their business plans to a panel of judges, which included Bernard Callinan (Managing Director of Key Construction), Jim Hart (ex-student, now running his own architectural practice called West Hart Partnership), Margaret Harrison (Assistant Principal of the College) and Peter Brown (Procurement Manager at the College). They listened to the students deliver a 15-minute presentation of their business ideas, before firing questions at them to see how they handled cross examination.

The winning presentation was delivered by students Faizal Zeenab and Nathan Egleton, who came up with a business plan for “That Food Truck”, an American-style food truck. They received gold certificates and £200 and will also be presented with a trophy at the end-of-year College Awards Evening.

Second were Tanya Ellis and Bayleigh Mooney. Their business idea was Sparkz, a service that personalised footwear and other accessories. They received a £100 second place prize, along with silver certificates.

In joint third place were the businesses BabyBloom and Your Sport. Babybloom was the brainchild of Jodie Randall and Isma Ramay, who were pitching to create designer organic baby clothes. Meanwhile, Your Sport was the idea of Ryan Jones and Angelo Millas, who had planned a specialised sports shop. They shared a joint third prize of £100 and were awarded bronze certificates.

Bernard Callinan, Managing Director of Key Construction and the main sponsor for this event, commented:

“We were delighted to be invited by the College to support this event for the third year. It is clear to see the hard work and effort the teams put into their presentations and the results were particularly impressive. Well done to all involved.”

“We’re grateful to Key Construction and West Hart Partnership for supporting this event again. It’s a tough challenge that was set for the students, who had to face some very tough questions from the dragons, but they represented the College with real professionalism and enthusiasm. The dragons commented that the standard had gone up a level this year, which is great to hear.”