A level and BTEC Students at The Sixth Form College, Solihull got a head start on their career plans this week as the annual Higher Education & Higher Apprenticeships Fair took place at the Widney Manor Road campus. 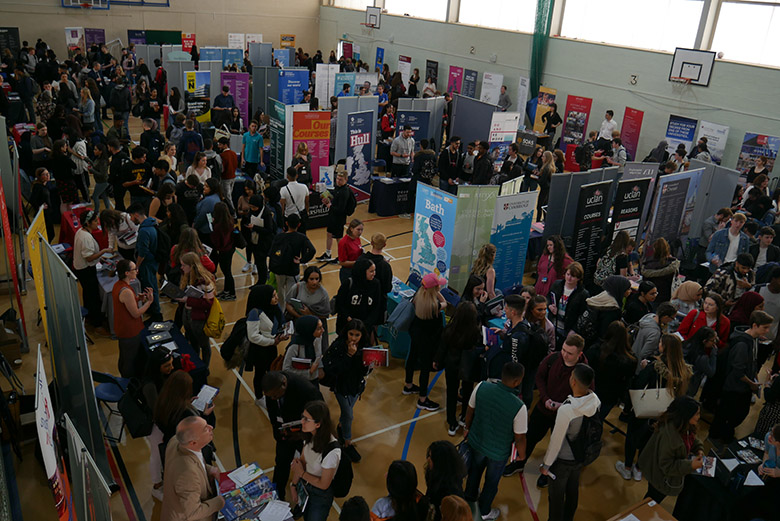 One of the biggest such fairs of its type in the country, the event saw 65 universities and 16 employers in attendance, setting up with stalls in the Sports Hall and Dance Studio. Among the institutions present were prestigious universities such as the Universities of Cambridge, Manchester, Nottingham, Sheffield, Warwick and York. Local HE providers were also there including Aston, Birmingham, Birmingham City, Coventry, Newman and Wolverhampton Universities. The usual timetable was suspended and students spent the morning walking around the hall to pick up prospectuses and talking to representatives from these universities.

In addition, a host of expert speakers came into College for a seminar programme, with specialists in a wide range of fields of study and careers present to talk to the students. Among the subjects of these seminars were Teaching, Computing and IT, Creative Arts, Nursing, Pharmacy, Medicine, Dentistry and Mathematics. There were also the UCAS application process, which many of these students will be starting this autumn.

“Our students are really lucky to have such a big and well attended Higher Education and Higher Apprenticeship Fair on their doorstep. We are grateful to all the universities and employers who come each year to talk to our Year 12 students. It’s a fantastic opportunity for our students to start thinking about what they want to do after College because when they get back from their summer break they will have to start thinking about making applications. There are many routes open to them and this event aims to show students what those routes are.”

Last year more than 800 students progressed onto Higher Education from the College; indeed The Sixth Form College, Solihull is the largest provider of undergraduate students in the region.