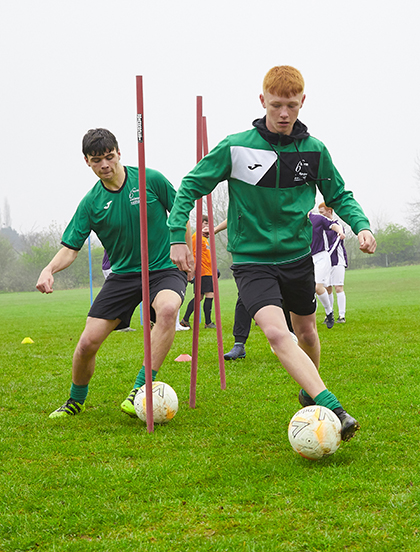 The 2nd Football Team at The Sixth Form College, Solihull have been crowned this season’s champions of the ECFA West Midlands U-19 League.

The team remained unbeaten throughout this season – repeating the feat that last year’s team managed. Among the impressive results they achieved this year were a 13-1 victory over Gloucester College, a 13-0 win against King Edwards Stourbridge and a 6-2 success against Sandwell College. Top scorer for the 2nd team Jack Long with 25 goals in 13 games.

Meanwhile, the 1st team narrowly missed out on winning their league, despite an excellent season themselves, including an 8-2 win over Dudley College, in which Hassan Shah scored 6 goals. Hassan Shah is the team captain and he has led by example this year, smashing the goal scoring record this season by netting 35 goals in 12 games.

“It’s been a great season and all the players in both the 1st and 2nd team have done themselves and the College proud. It’s great that the 2nd team have defended the title we won last year and I congratulate them on this just reward for their hard work.”

This piece of silverware is the fifth league title in six years for the College, keeping an impressive run of success for the football team going. It follows the Netball teams success a couple of weeks ago, as they too won their league, while the Basketball Academy (run in association with the City of Birmingham Rockets) narrowly missed out on their league title on their head-to-head with the eventual champions. The Rugby team have finished in 3rd place in their league.

Lee Jones, Curriculum Leader for Sport at the College, added:

“Congratulations to all the players and coaches across all the sports this year for what has been an outstanding season.”