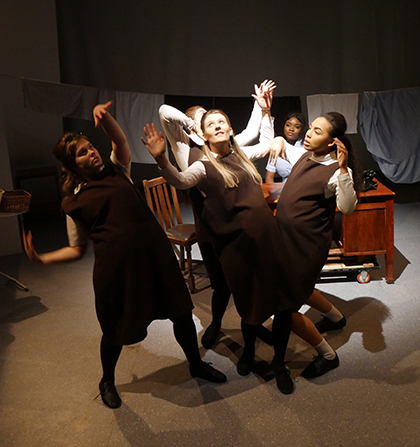 Drama students at The Sixth Form College, Solihull put on a public showcase to family and friends last week, as they performed their final assessed practicals.

The second year students on our A level Drama course split into groups and performed extracts from five different plays. Each performance lasted between 20-30 minutes. The extracts they chose were from “Be My Baby” by British playwright Amanda Whittington, “Jane Eyre” based on the novel by Charlotte Brontë, “Kindertransport” by Diane Samuels, “The Glass Menagerie” by Tennessee Williams and “The Lovely Bones” based on a novel by American writer Alice Sebold.

The practical coursework element of the course carries 30% of the marks for this course and examiners from AQA visit the College to assess their performances. Students could choose what they would be assessed on, with most electing to focus on acting as their skill. However, set or costume design and lighting or direction were also possible focuses of assessment.

“Our second year students have done several public performances during their two years of study with us, but the presence of an external examiner there too made it all the more nerve-wracking. However, they worked really hard in preparation and acted very professionally on the night. We have an ensemble approach to Drama and that has helped the students to hone teamwork skills that will stand them in good stead for the future. I’m proud of the work they have produced.”