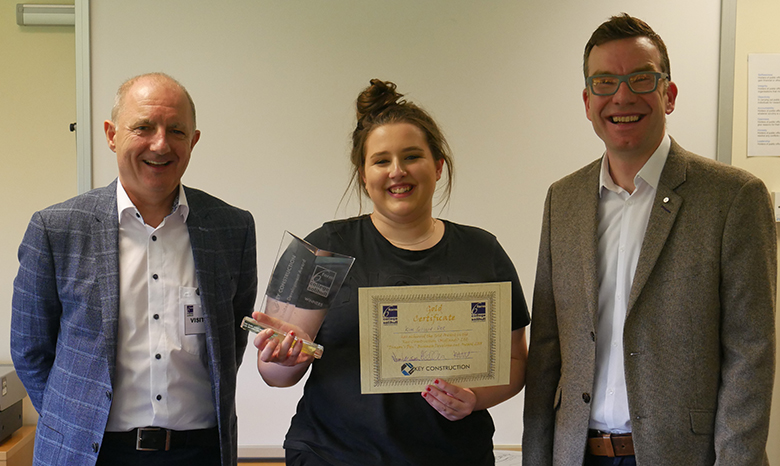 Three students presented their business plans to a panel of judges, which included Bernard Callinan (Managing Director of Key Construction), Jim Hart (ex-student, now running his own architectural practice called West Hart Partnership), Mutrice Bedford (HR Manager) and Peter Brown (Procurement Manager at the College). They listened to the students deliver a 15-minute presentation of their business ideas, before firing questions at them to see how they handled cross examination.

The winning presentation was delivered by Kim Gillard-Pee for her vegan bakery business idea named ‘Cherry on Top’. She received a gold certificate and £200 and will also be presented with a trophy at the end-of-year College Awards Evening.

Bernard Callinan, Managing Director of Key Construction and the main sponsor for this event, commented:

“We were delighted to be invited by the College to support this event for the fifth year. I was very impressed with all three pitches and picking a winner was a very difficult decision. It was clear to see that all three students have got a very bright future ahead of them. Well done to all involved.”

“Thanks go to Bernard from Key Construction and Jim from West Hart Partnership for sponsoring this event again. The students faced some very tough questions from the dragons, but they represented the College with real professionalism and enthusiasm. I was proud of their enthusiasm and professionalism and they have developed skills that will stand them in good stead for their future careers.”