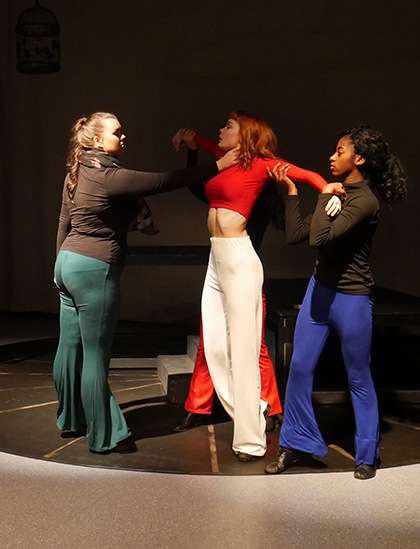 Emerging actors at The Sixth Form College, Solihull put on a Drama Showcase for parents, staff and other students last week.

Second year A level Drama students split into four groups to creatively adapt four plays: ‘The Great Gatsby’ by F Scott Fitzgerald, ‘Misery’ by Stephen King, ‘She’s Leaving Home’ by Lennon & MaCartney and ‘The Fountain of Fair Fortune’ by JK Rowling. These were the stimuli that the students based their productions on, but the end result was all their own work. They were responsible for set, props, lighting, sound and the devising of the production itself, not to mention acting in the production.

These performances are being assessed and will form part of their final A level grade in Drama and Theatre. Videos of the productions will be sent to the exam boards for moderation.

“The students put in so much hard work to these productions throughout the Autumn term. They worked well together and came up with some really interesting interpretations of classic stories. Performing in front of an audience is a nerve-wracking thing to do, but the students coped well and rose to the challenge. Everyone who attended seemed to enjoy the evening, including some prospective students who are thinking about joining us next September to study Drama.”

See the College Facebook page for photos from these performances.

There are further Drama Showcases scheduled for 2018, on Wednesday 17 January (7.00pm) and on Monday 19/Tuesday 20 March (7.00pm). Tickets for the January Showcase will be available after New Year by emailing the College’s Central Admin Office or calling 0121 704 2581. We will be fundraising for the Drama department and asking for donations of £4 for adults and £2 for concessions for those wanting to attend.