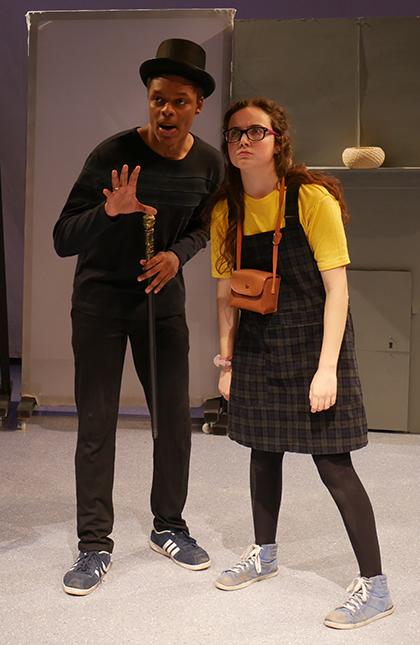 Drama students at The Sixth Form College, Solihull performed their assessed practicals for an audience of staff, parents and friends last week ahead of their final assessment next week.

The second year A level Drama & Theatre students split into groups to translate novels and stories into highly visual theatre pieces using many physical theatre techniques, including ensemble movement and playing a multitude of characters. These productions included a performance of ‘The Lovely Bones’, which was an adaptation of the novel by Alice Sebold. Another production was ‘Coraline’, adapted from the novel by Neil Gaiman. ‘A Snowball in Hell’, an adaptation of the novel by Christopher Brookmyre, completed the productions based on books, while another group based their performance on the Ancient Greek epic myth ‘The Legend of Hercules’.

The students worked together to not only act in these performances, but also to control lighting, sound, costume, props and stage direction. For those wanting to continue their drama studies at university or stage school, this A level is an excellent grounding in drama and theatre.

“Performing under the same conditions as any professional company and assuming all the discipline and commitment that accompanies public performance, the students have developed very valuable skills that will help them with their future drama and theatre endeavours once they finish their A levels. It’s also a massive part of their final A level grade, as the practical assessment has been raised to 60% of the A level. Having this practice will ensure they are more prepared for the real assessment next week.”

College students are fortunate enough to use three professionally-equipped studios for rehearsal and staging finished work and get plenty of support from our dedicated and experienced Drama staff, who are always extending students learning with additional trips and workshops to contemporary theatre practitioners.