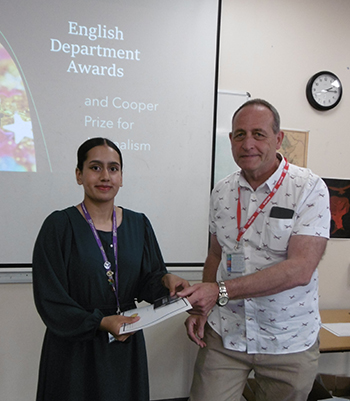 English students at Solihull Sixth Form College enjoyed an end of term celebration before they head off on their summer holidays as awards were handed out for hard work and achievement and the inaugural Cooper Prize for Journalism was awarded.

Year 12 students studying A level English Literature and English Language came together during a lunchtime to their effort and achievement and receive commendations from Principal Martin Sullivan.

“It has been a challenging year for Year 12 students. This was a fantastic opportunity to recognise their hard work, maturity and resilience.”

The Awards lunch was also an opportunity to hand out the inaugural Cooper Prize for Journalism. The winner was Thia Douglas and the runner up was Saima Elahi. Both students wrote powerful opinion pieces about identity in 21st Century Britain.

The annual award was set up in honour of former English teacher Christine Cooper, who died in March this year. Chris was a long-standing member of the English department, much-loved by her colleagues and the many students she had taught over the years. Her husband, Steve Cooper, presented the award.

Saima’s article ‘Coming to Terms with my Identity’ explored the challenges and prejudices faced by young people of Pakistani heritage. Thia’s article “I despise the ‘strong black woman’” explored the harmful effects of stereotypes.

“Both pieces of journalism were engaging and thought-provoking. Saima’s writing was brave and open. It was eye-opening for the judging panel. Thia’s article was also honest and challenging. She wrote with real flair, sophistication and maturity.”