Students at The Sixth Form College, Solihull attended the University of Birmingham Classics Conference recently to explore the latest research in the Ancient World. 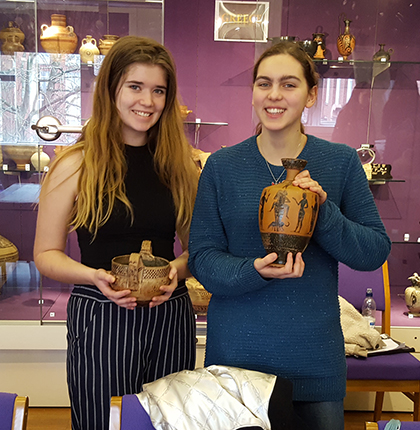 A group of six A level Ancient History and Classical Civilisation students were at the Saturday event in Birmingham. They handled and examined artefacts from the Black Sea and Classical Athens and were involved in lively readings of plays in the original Greek, retold by Dr Lucy Jackson from Kings College London. Topics on Women in Classical Literature were explored, including discussion on the unsung voices of female characters.

Isobel Thomson and Verity Brookes (former students of Swanshurst and Queensbridge Schools respectively) were two of the students who attended the Conference and they found the activities both exciting and useful in supporting their A level courses. They said that they had learned to look at the ancient sources in different ways and it had helped them relate better to the audience at the time the plays and poems were composed, as well as helping them make links between Classics and their other subjects.

“My favourite parts of the conference were the handling of artefacts session and the lecture about women in Greek Tragedy (specifically the chorus), as it really made me think in a way that I hadn’t before and I found it very interesting.”

“The Conference at the University of Birmingham was fantastic. It was great to see the students giving up their private time to attend and enjoying the experience so much. The hands-on nature of the activities really brought the latest research to life for the students and it can’t fail to help them with their wider understanding of the subject matter they are studying.”