Dance and Drama student at The Sixth Form College, Solihull put on a Christmas Showcase this week to give staff, parents and students a look at the work they are doing in their studies this year. 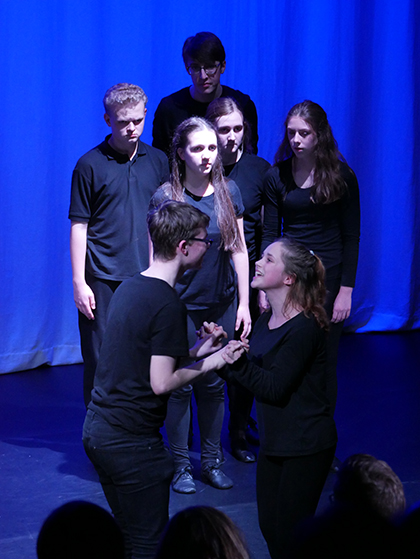 The Performing Arts Christmas Showcase included 13 dance and drama sketches during the evening performance. Both A level students and those participating as an enrichment activity took part, with Christmas-themed performances from the enrichment students. Those in the Performing Arts Academy put on a short Physical Theatre version of ‘A Christmas Carol’, while those in the Collision Dance Company put on a routine called ‘Christmas Lights’ to a Coldplay song.

Among the A level Drama performances on show were scenes from ‘Our Country’s Good’ by Timberlake Wertenbaker and ‘Antigone’ by Sophocles. Among the Dance performances were some duets and group choreography, including a performance called ‘Revelations’ which was choreographed in the style of American Dance Theatre company Alvin Ailey.

“The Showcase was a wonderful opportunity to share the excellent work our Dance and Drama students have been doing this term. We also have students who do not study either subject at A level, but very much want to be involved in a creative project, so this Showcase was the culmination of their efforts this term too.

“This event was also brilliant practice for the students, who will have to perform under pressure for their assessments after the New Year. Producing their best performance in front of an audience, when they know they can’t stop and start again helps to prepare them for that challenge.”