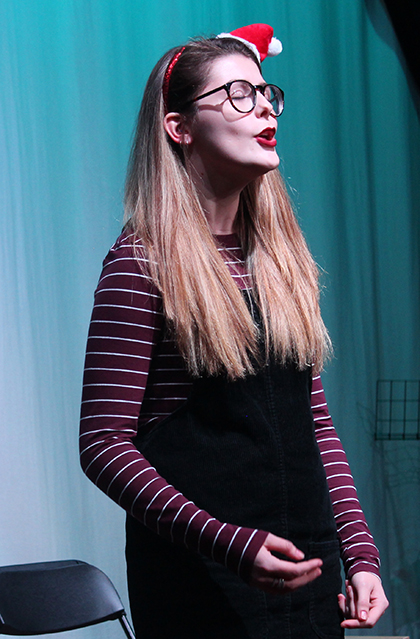 Musicians at The Sixth Form College, Solihull brought some Christmas cheer to the end of a busy term this week.

Audience participation was thoroughly encouraged with a selection of traditional Christmas carols and the College Choir, which consists of both staff and students, also performed. The latter featured festive songs like “A Child is Born in Bethlehem” and “The Most Wonderful Time of the Year” among their songs performed. Several student bands were also in action, performing both Christmas songs and some of their other favourite songs.

A level Music students took the opportunity to practice their performing skills, something they will be assessed on and which will go towards their final A level grade. There were solos and duets on guitar, piano, flute and vocal performances.

“This was the second public performance of the year for our A level students and a great opportunity for them to practice in front of an audience, which always adds a certain pressure. It was also a chance to let our hair down and have some fun with some Christmas favourites, which is always enjoyed by staff, students and parents alike.”

A BTEC Art & Design student Yasmin Ali took photos of the students performing at the Concert for her “live brief” project. This is where a student takes on a client, just as freelance photographers would do in the real world. In this instance, the College was the client and Yasmin was tasked with taking photos that the College could use for publicity.

The next Music concert at the College will be the Easter Concert on Wednesday 10 April 2019 at 7.00pm. Admission will be free (there will be a retiring collection to raise money for the Music department) and tickets will be available in the New Year from the College Marketing Office.