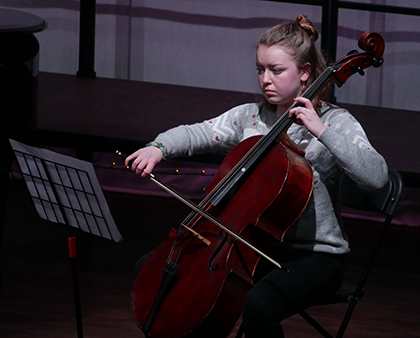 The Sixth Form College, Solihull annual Christmas Concert took place this week, as staff, students, parents and guests joined together to get into the festive spirit.

As well as the traditional Christmas carols, the concert was a celebration of the talents of our A level Music students. There were group and solo performances on guitar, flute, violin, trombone, piano and vocal performances too. Student band ‘The Afterparty’ were there to perform “Treasure” by Bruno Mars, while the College Choir, which consists of both staff and students sang several festive songs.

Music teacher Chris Phelps commented, “There were some very enjoyable performances at the Christmas Concert this year, as is always the case. As well as the usual Christmas carols, we were able to showcase some of the very advanced pieces that our A level Music students have been working on for their A level studies. Public performances like this will help prepare them for their assessments later in the year.”

There are photos from the Concert up on the College Facebook page.