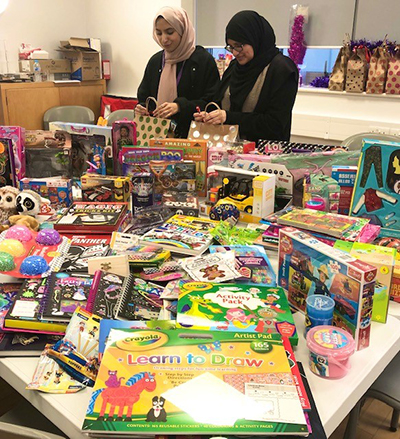 Staff and students at Solihull Sixth Form College came together to donate hundreds of pounds worth of food, games and toys to those less fortunate than themselves this Christmas.

Moona Butt, Student Development Officer, led this project with the Student Council, the Islamic Society and the wider Student Development Team. They decided this year’s Christmas Charity Appeal would benefit the Bethany Food Bank, Solihull Borough Council LAC (Looked After Children) Team and the Child Asylum Team & Post-16 Team under OVOS (Our Voice Our Services) charities. To this end, staff and students were encouraged to give money or bring in donations of food, toiletries, games and toys.

The response from the College community was fantastic, with £523 raised in just 10 days, as well as donations of food. The money raised was used to buy food and toys and at the end of term 20 large boxes of food, including treats that families might not usually be able to afford, were handed over. In addition, four large boxes of toiletries and a huge selection of toys, puzzles, games, books and art & craft activities were donated for Christmas gifts for children in care. Finally, 16 care packages for teenagers were put together, including 10 items of toiletries, socks, gloves, face masks and treats in each package.

The Student Development Team at the College commented:

“Students wanted to raise awareness about the reasons for social inequality and why people use foodbanks, whilst doing something to help those less fortunate than themselves during the season of good will.”

The donations have been gratefully received by the charities. Cathy Grimley and Alan Mathison from the Bethany Food Bank in Witton have said that the food and toiletries will be distributed to families in need and the homeless via Centrepoint and Brush Strokes.

“We are overwhelmed by the support and generosity of all the students and staff of Solihull Sixth Form College. Please know that the food will go to feed several hundred people who use the facilities at Bethany Foodbank.”

“We are absolutely blown away by the huge number of toys, games and books that have been donated. We are very thankful for all the time and effort that the students and staff from Solihull Sixth Form College have put into this Christmas Charity Appeal. These donations will make a huge difference to young people and children that receive them whilst bringing them a lot of happiness over the festive season.”

“You have no idea of the impact these wonderful gift packs will have on the young people who receive them. Not just the gifts, but the fact that Solihull Sixth Form College students have taken the time to think of them and the efforts they have put in for them.”