A former student at The Sixth Form College, Solihull has won a prestigious science competition with the UK Space Agency. 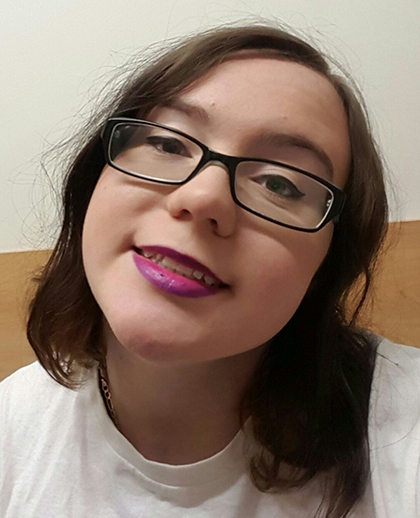 Chloe Hewitt (aged 19, from Solihull) entered the competition to think up new ways for the UK government to use the data collected from satellites. She submitted a flyer detailing how satellite photos and radio wave data mixed with computer code could be used to differentiate between industrial buildings and other structures so we could start taking full advantage of abandoned warehouses and target these as crime hotspots.

“It’s been a bit of a shock to be honest. I never entered it expecting to win and I’m not sure how I won. I entered because I found it interesting and I didn’t know much about satellites. I didn’t even know the UK Space Agency existed until I entered the competition.”

Chloe, who is currently studying Physics at Cardiff University, has won £5,000, plus the opportunity to get further funding and opportunities with the UK Space Agency. She will also get free tickets to the UK Space Convention and a tour of the Space Agency. While at the College, she studied Mathematics, Physics and Religious Studies at A level.

“I don’t have firm career plans at the moment, but I think it would be amazing to work at a place with such prestige in the future. I’m studying Physics with an integrated Masters and a year in industry, which has probably been one of the best decisions I’ve ever made. I wasn’t certain on my course before I started, but I don’t think any other subject would have suited me better.”

Chloe has also been taking part in the Big Bang competition, which is a young adult competition based around the Big Bang Fair in Birmingham each year. The event is aimed at promoting STEM (Science, Technology, Engineering and Mathematics) for young people, with the theme changing each year. The focus can be Physics, Engineering, Computing and other topics. The highlight of each year is a competition in which thousands of entrants make a project based on a STEM subject of their choice, competing in either Science or Engineering. Schools and groups can enter, as well as single competitors. The best 200 entries make the Finals and are then whittled down to the best 10, before the Young Scientist of the Year and Young Engineer of the Year are chosen, along with about 30 other awards based on scholarships the businesses at the Fair offer. Chloe made a project on Thermoelectric Generators and how they can be applied to things like your body to generate ‘free’ electricity from our wasted heat.

“I made a simple generator that charged peoples phones at the Fair. I got down to the finals, but sadly didn’t win any awards. However, I do intend to try and get in contact with Rolls Royce, as they financed one of the other competitors projects, to see if I could try out Thermoelectric technology on some of their engines.”

As well as studying for A levels, Chloe also took part in the College’s volunteering project Team Gambia during her time at the College. She helped to raise funds for an impoverished school in The Gambia and spent a week in country teaching children at the nursery school.