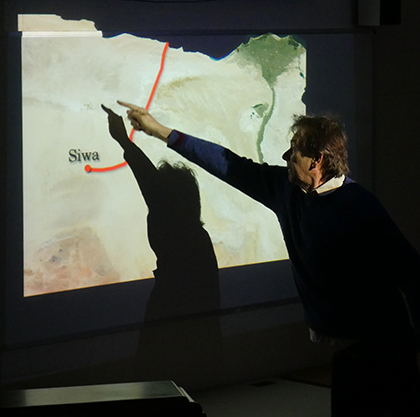 Humanities students at The Sixth Form College, Solihull have been learning about Alexander the Great this week, thanks to visiting speaker TV presenter, historian and archaeologist, Michael Wood.

Students of a number of Humanities subjects attended the presentation to see Professor Wood’s photographs from this expedition and hear what he learned on his travels. The history of Alexander the Great, who reigned as King of the Ancient Greek kingdom of Macedonia from 336–323 BC, was particularly relevant to those students taking A level Ancient History and Classical Civilisation.

Karen Greaves, Curriculum Leader for Humanities at the College, commented:

“A big thank you goes to Michael Wood for giving up his time to come into College to talk to the students. I was delighted to see the lecture theatre so full of interested students, who will have learned a lot from Michael’s expertise on the subject, not to mention his enthusiasm.”