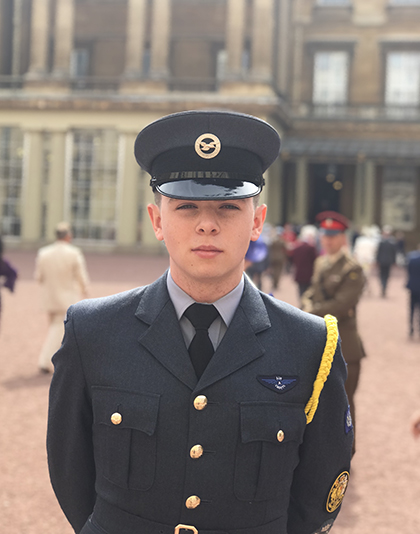 A student at The Sixth Form College, Solihull has recently had the honour of attending a Royal Garden Party at Buckingham Palace as a reward for his role as Lord-Lieutenant’s Cadet in the Royal Air Force Air Cadets.

Connor Burke (aged 18, from Birmingham) received the honour in recognition of his commitment to the air cadets, having joined the RAF Cadets in 2013. He moved up the ranks from Cadet to Cadet Warrant Officer during his time with the Air Cadets, after transferring unit as a newly promoted corporal in 2016. In April 2018 he was appointed the Lord-Lieutenant’s Cadet for the West Midlands. This role, which lasted a year, saw him take on 15 official duties, including two Royal engagements. He met the Earl of Wessex, Prince Edward, for the expansion of the Centre for Clinical Haematology at the Queen Elizabeth Hospital in 2018. More recently, he met the Duke of Sussex, Prince Harry, at the opening of a memorial in Cannon Hill Park to those who lost their lives in the Tunisia terrorist attacks.

“It was an honour to be invited to the Garden Party at Buckingham Palace. My Officer Commanding came with me and it felt very similar to one of my official duties as the Lord-Lieutenant’s Cadet. There were about 8,000 – 10,000 people there and the party was hosted by the Prince of Wales, Prince Charles and the Duchess of Cornwall. The Princess Royal, Princess Anne was there too.”

Connor is in his final year of A level studies in Geography, Law and Mathematics at the College. He has long held an ambition to be a pilot in the Royal Air Force, but is now undecided whether to pursue that or a career in the Police Force. In particular, he is considering whether to pursue a West Midlands Police Degree Apprenticeship, which involves paid work and a fully funded degree with Staffordshire University.

“Being in the Air Cadets has given me lots of opportunities and lots of contacts and I’m grateful for the experiences it has provided me. A career in uniformed service of some kind is really important to me, so whatever I end up doing I know that my time with the Air Cadets has helped me a lot.”

Connor has also completed his Duke of Edinburgh Gold Award and is a qualified St John Ambulance Activity First Aider. He also had the chance to pursue voluntary work with the College. He was part of the Team Gambia project in 2018. This involved fundraising for an impoverished school in The Gambia and then spending a week working with the children at the school.

“The Gambia trip was the most amazing experience of my life. I’ve always wanted to travel outside of Europe and particularly to see a Developing country. The Gambia was totally different to anything I had experienced before and there was never a dull moment. I actually found working with the children really difficult, because that’s not something that comes easily to me, but that’s why I wanted to go. I wanted to push myself and this trip certainly did that, but it was so rewarding.”