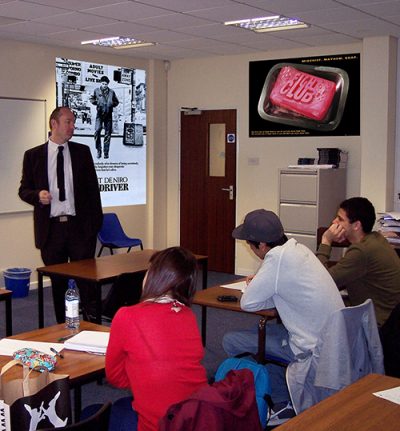 There are two examined components:

Component 1: Varieties of Film and Filmmaking
Section A: Hollywood 1930-1990 – a comparative study of one film from the classical Hollywood period (eg Vertigo) and one from the ‘New’ Hollywood period (eg One Flew over the Cuckoo’s Nest)
Section B: American film since 2005: a study of one contemporary mainstream film (eg LaLaLand) and one contemporary Independent film (eg Winter’s Bone)
Section C: British Film Since 1995: a study of two British films (eg Trainspotting and This is England)

What do our learners go on to do?

Film Studies can help with analytical skills required in a range of professions. Learners of this subject may choose to follow a course in a similar area at degree level. Typical career paths involve filmmaking, work within digital media and animation. Current A Level students are expecting to take up Film Studies courses with both practical and theoretical elements.

There are no specific costs involved in studying A level Film Studies, but we offer trips that will require payment for transport.

Film Studies students take the subject with a range of other courses. Among the most popular are Media Studies, English Literature, Theatre Studies and Photography, but the subject can be combined successfully with other A Levels. Learners may wish to be involved in the Student Magazine or Creative Writing enrichments.

This information is correct for September 2023 entry.

Make sure you know what grades you need to achieve to get your place.

Come and have a look!

Come along to one of our free college open days and see what courses and options we have to offer you. Book your place today!

Daisy Holgate came to the College from Swanshurst School. She chose to study Biology, Chemistry and History at A level…